Skip to content
This is wine- if the merest driblet falls in the Nile,
its scent makes the sober crocodile drunk without end.
If the deer on the plain drinks but a single drop,
he becomes a roaring lion, fearing no tiger.
Live in joy with joyous black-eyed girls,
for life is just a tale, a breath.
Be open to the present,
silent on the past.
All I want is scented tresses,
the houri-sprung moon-faced one.
Happy he who gave and could take pleasure,
unhappy he who neither took nor gave.
This world is wind and cloud and mirage.
Pour more wine, for what will be, will be.
I do not dye my hair black
so as to be young again and sin again
but because people dye their clothes black in
mourning,
so I have dyed my hair black, mourning my old age.
-Rudaki

These delightful poems were composed by a famous Persian poet, musician, and singer named, Abū ‘Abd Allāh Rudaki (859-941 A.D.). Born in the village of Rudak in the province of Khorasan (The Land of the Sun), now modern day Tajikistan.

Growing up during the days of the Samanid Empire, Rudaki wrote as many as 1,300,000 verses. He was the court poet to the Samanid ruler Nasr II, and enjoyed much the pleasures of life. In his writings, he explored much on the philosophies of humanity and it’s quest for happiness. Near the end of his days, he was submerged in the life of hardship, after losing his friendship/favor with Nasr II. Greatly affecting his writings which expressed an image of desolation and sorrow.
“Adam of Poets” was the title he earned. The legacy Rudaki left behind was the impact of being the founding father of Modern Persian Literature, and an amazing influence of the Modern Persian language. Some historians suggest that he composed 180,000 poems which was forged into a collection (divan). However, the Divan of Rudaki did not survive. Though a tragedy, we still have no more than 1,000 out of 100,000 of his surviving couplets.
Down the road, I’ll post more of his works that will stand out to me. Was very impressed with his style, let alone the history behind Rudaki. 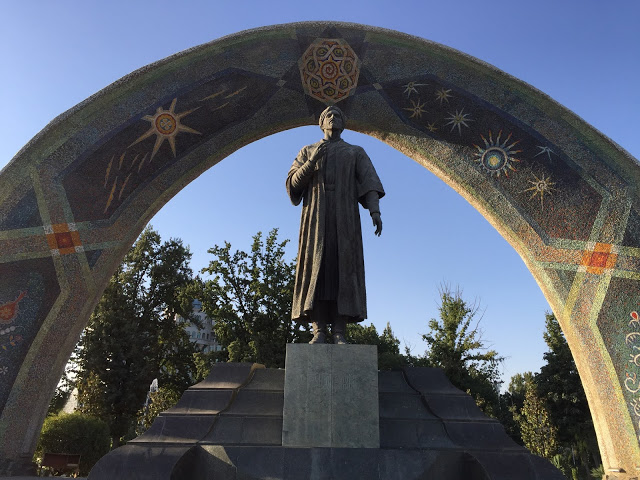 One thought on “Life and Wine: Extracts and Studies from “Rudaki” a Classical Persian Poet”